Home > A/C Repair in Mesa: What You Should Know

A/C Repair in Mesa: What You Should Know

If you need air conditioning repair in Mesa, then it is a good idea to have some knowledge beforehand. 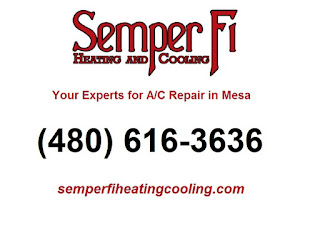 The Temperature’s Going Up Soon: Get Air Conditioning Repair Today

If you’re like most people living in Arizona, you are probably not looking forward to the summer.  As the temperatures start creeping up, so does your need to turn on your air conditioning, but before you do so, you might want to get your HVAC unit serviced.

Why do you need air conditioning service?  Well, for one, you want your A/C to work when it gets hot, which could literally be any day now.  Don’t believe us?  Well, in March of 2017, because of a high pressure front, Arizona started seeing temperatures in the 90’s pop up.  We got as high as 98 degrees…in March.  March.  Think about that.  How do you know the high summer temperatures are going to wait until June until they hit?  We have had some summers where the temperature spiked in April and stayed hot well into November.  We’ve also had some years, where Arizona’s notoriously mild winters were even more mild, to the point of being non-existent.    And what happens if your air conditioning isn’t working?  You need to call a service that does A/C repair in Mesa.

How Does an Air Conditioner Work

How does an air conditioner work?  Well, according to this article excerpt from Wikipedia:

” Air conditioning (often referred to as AC, A.C., or A/C) is the process of removing heat from a confined space, thus cooling the air, and removing humidity. Air conditioning can be used in both domestic and commercial environments. This process is used to achieve a more comfortable interior environment, typically for humans or animals; however, air conditioning is also used to cool/dehumidify rooms filled with heat-producing electronic devices, such as computer servers, power amplifiers, and even to display and store artwork.

Air conditioners often use a fan to distribute the conditioned air to an occupied space such as a building or a car to improve thermal comfort and indoor air quality. Electric refrigerant-based AC units range from small units that can cool a small bedroom, which can be carried by a single adult, to massive units installed on the roof of office towers that can cool an entire building..” [VIEW SOURCE]

Air conditioning units don’t have a lot of parts, but with that said you want a professional HVAC contractor  in Mesa to work on them. Why not do it yourself?  Well, for one, you have to be comfortable working on a ladder, or on a roof.  While some A/C units are on the ground, just as many are on the roof.  In addition, you need to be familiar with both plumbing and electrical.

When you’re looking for a Mesa A/C repair service, make sure  you get estimates from them before agreeing to the work.

Meet with the company, and trust your feelings.  That way you know you’ve found the best a/c repair service in Mesa.